The Overlanders in Africa are in complete agreement. Uganda has lousy campsites. Bad facilities. For example, the presence of a clean, warm shower is a rare luxury. A positive exception is the campsite of a German owner near Kibale National Park with the chimpanzee trekking. A kitchen with German stews as an extra bonus. We notice that the employees of campsites with foreign owners are very friendly and good service oriented.

Neighbors
We park the G with roof tent on the spacious, well-maintained lawn of the 72-hectare Lodge & Camping. Our only neighbors are Mark and Corine with their three young children. The family was sent to Congo by a Rotterdam church and carried out development work in a local hospital. Mark is a doctor and Corine is specialized in medical technology. Every three months they briefly flee their adventurous life in the unsafe area. With a plane to the border and in a rickety boat across the river on the way to the campsite. Then they spend almost two weeks in the peaceful and quiet atmosphere. The young couple tells about their life and work in Congo. It commands respect. On their blog Healthcare in Congo can be read more.

Ebola
Mark says that in the case of an Ebola outbreak in Congo many charity organizations are tackling the issue. The approach is received with mixed feelings by Congolese. Western intervention on traditional funeral rituals is a reason to keep the sick inside. The large amount of visible NGOs in the Ebola area also evokes anger among the population. The social workers have to fear violence against themselves. Why is there so little attention for measles, which demands so many more deaths? Incomprehensible in the eyes of the villagers. But still, all investments in combating Ebola are bearing fruit. With medication, 90% of people survive the infection. To the great relief of the West.

Border checks
Only during the border crossings are we aware of the dreaded disease. Tanzania is the first country where the absence of Ebola phenomena is a criterion for crossing the border. Large posters with pictograms help to recognize the disease. Keep a thermometer 10 cm away from the head, estimates any fever. Closer to Congo, the procedure becomes more extensive. In Uganda we walk through a separate Ebola tent before we reach customs. In addition to measuring the fever, we also have to disinfect our shoes and hands. The color of the water in the drip tray shows that washing hands is not a superfluous luxury for most border passers. The thermometer always indicates our subcooling. Everything better than fever.

Dutch frugality
We look forward to Murchison Falls National Park. In the 40 years after Idi Amin, the murdered Wildlife has returned. In the northern part above the rivers, where the surveillance is greatest, you can find most wild animals. With an entrance halfway through the day we make maximum use of the park permit valid for 24 hours. Before an afternoon drive the park in and after the morning drive the park out again. In Lodge annex camping two other couples eat in the late breakfast shift, also with the same strategy. All Dutch people.

Service not included
In the Murchison Falls nature park, camping among the wild is possible. One of the scarce places that our journey still offers. The legal variant is quite pricey. We ignore the tough stories of campers who secretly pitch their tent. We pay the high fee well. Some service is not included. It takes us time and effort to find out where the official wild camping spots can be found. We must collect the included guard from an unknown location. We save our energy. We'll save ourselves in the wild.
We cannot buy the map of the nature reserve at the same counter, for which we referred to the counter across the river. When the boat from 12.00 o'clock delivers us to the other side, the counter is already closed due to a lunch break until 14.00 o'clock. It is only the first in the series of references to the other counter on the other side of the river. For all tickets that we have to buy. An African variant from cupboard to the wall. We find it more annoying than hilarious.

Amazing landscape
It is especially the Queen's track that pleasantly surprised us. A rolling landscape with tall grass and trees on the horizon. We take a break with a view of the herds of buffalo, grazers and Rothschild giraffes. These long necks are dark colored. Another 1700 copies on earth. Only found in Uganda and Kenya. And in the Burgers' Zoo and Beekse Bergen Safari Park in the Netherlands. The herd counts 20 peers. We have never seen such a large group of giraffes before.
It is almost silent on the open plain. Only the birds chirp. The long grass waves gracefully. The afternoon sun colors the yellow-green crop with a golden glow. A savannah can be that beautiful. With difficulty we get back in the car on the way to the campsite. With a beer and a view of Lake Albert we enjoy the low afternoon sun. Buses with tourists drive on and off. Away before it gets dark. The red-colored setting sun is exclusive for both of us.

Predators
We have already been spoiled by the visits to many nature parks. Our spot-wish list mainly shows predators. Leopards and lions are favorite. And wild dogs, if present. We take the last bite of dinner when a lion makes himself heard. He delimits his territory with a deep humming sound. We quickly withdraw to protected terrain; the roof tent. At night we hear the man roar from different directions. Or are they several manned peers? The alarm clock is extra early. Looking for the golden blonde predators as quickly as possible. We find the lion's footprints in the sand on a track near our campsite. With the tall grass, an extra high dose of luck is needed to see them. Coincidentally walking or lying close to the track. This morning the animals are apparently further in the field. We don't see them. Nor do the rangers, with whom we inquire.

Murchison Falls
A large boat on the Victoria Nile takes us upstream to the Murchison Falls. Along the waterfront, African elephants drink water and quickly disappear into the forests. Many Nile crocodiles lie on the banks in the warm sun. The tallest species in Africa. With lengths of 6 meters and 700 kg, they are just as impressive as the salties in Australia. It is breeding season for these reptiles. They guard the nest with eggs on shore, which must be at least 28 degrees. Occasionally expectant parents enter the water to cool off.
After 18 km we reach the waterfall. The river water flows down through a gap with great force. The result is a white curtain with high splashing water. That evening we camp on top of a mountain that gives a view of the river before it falls down. The image is complete. 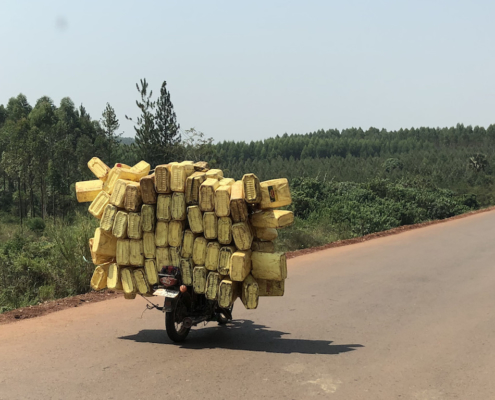 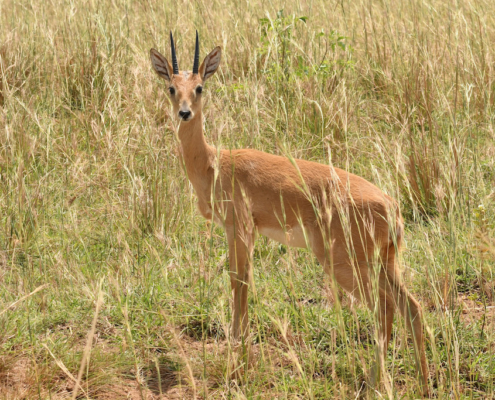 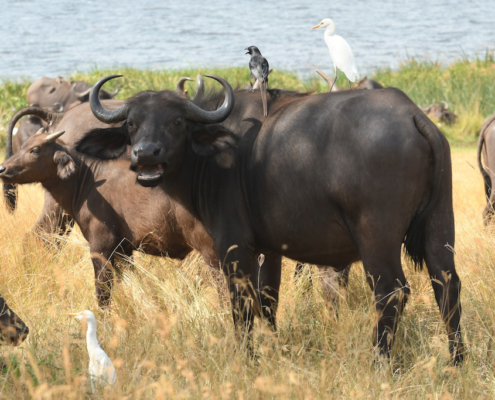 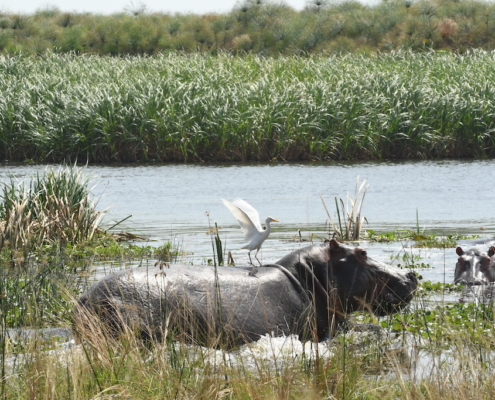 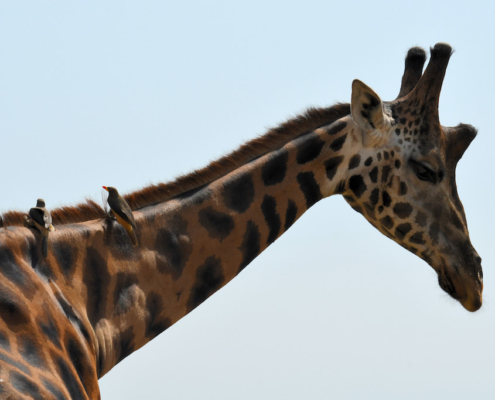 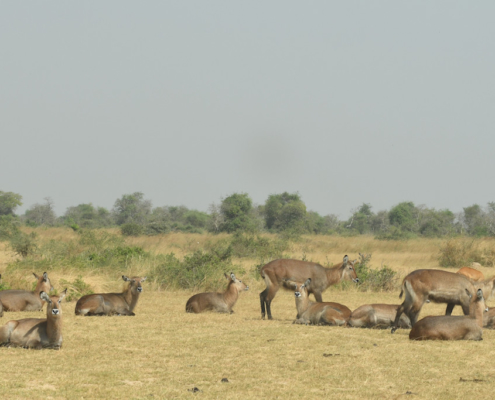 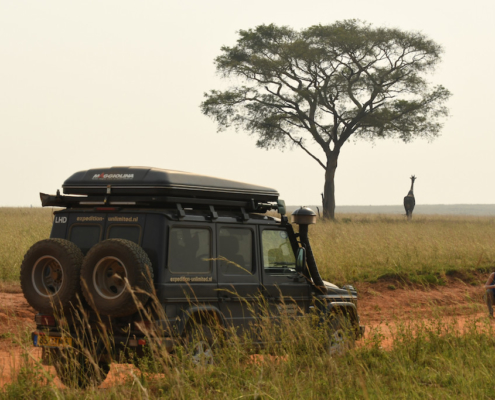 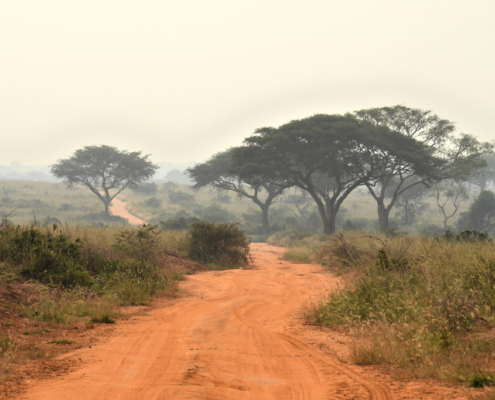 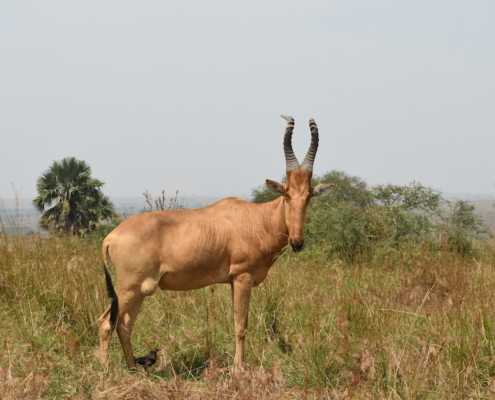 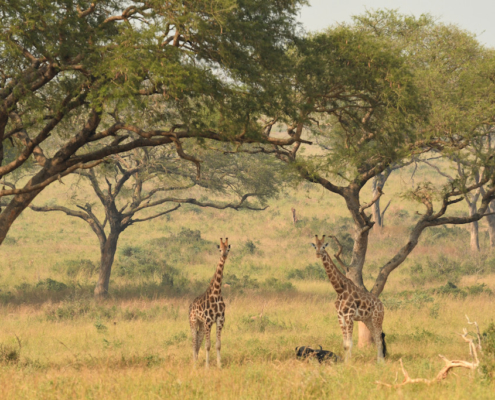 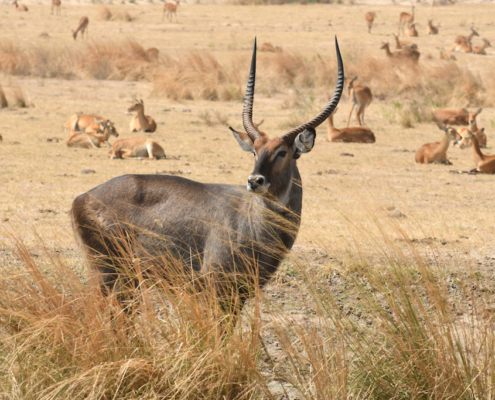 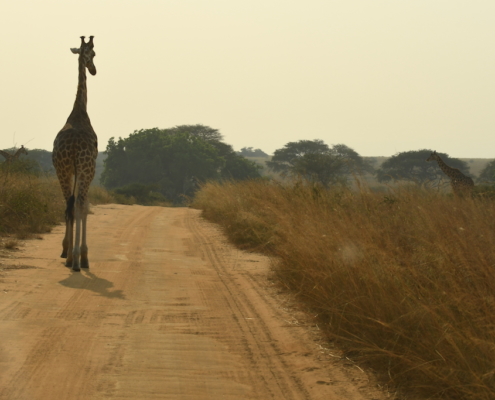 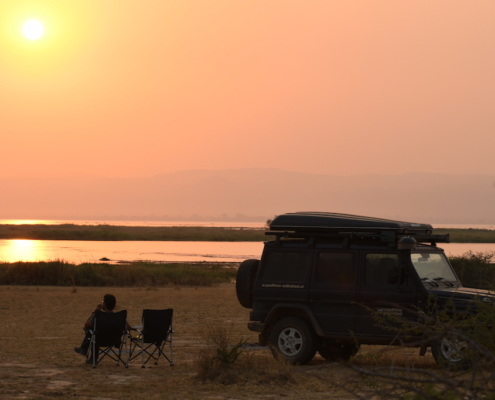 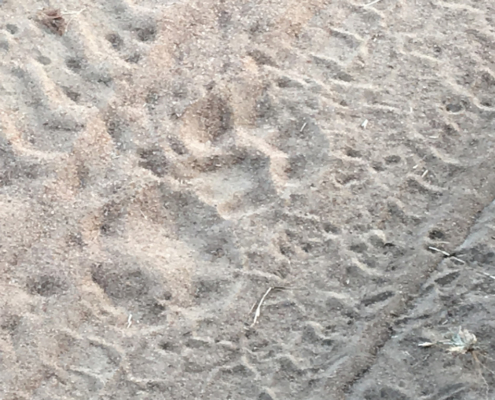 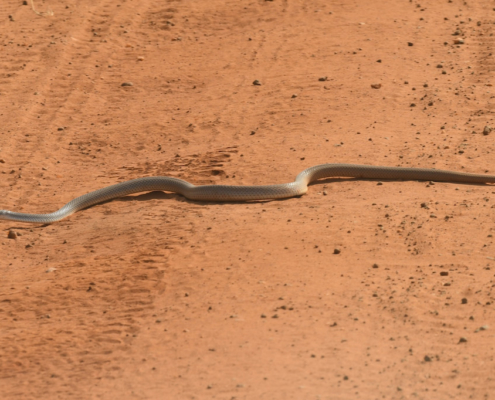 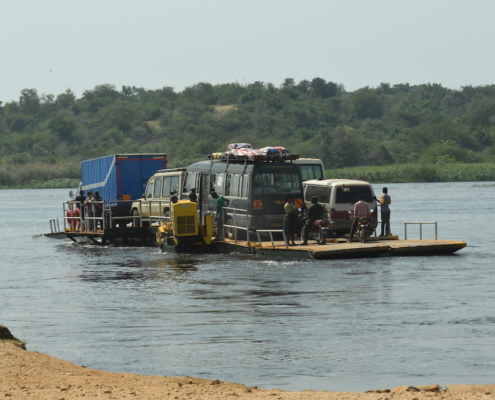 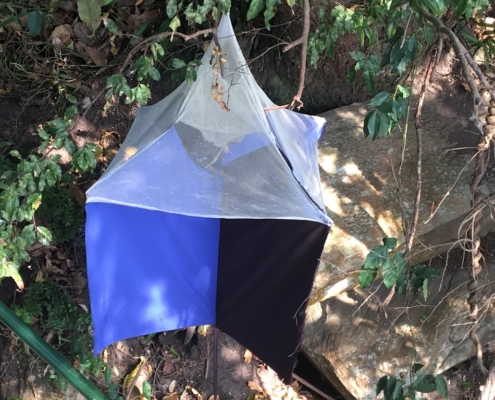 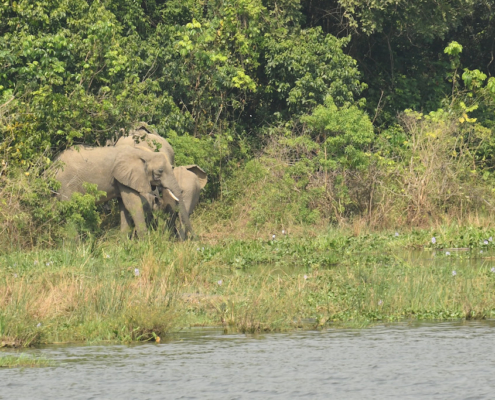 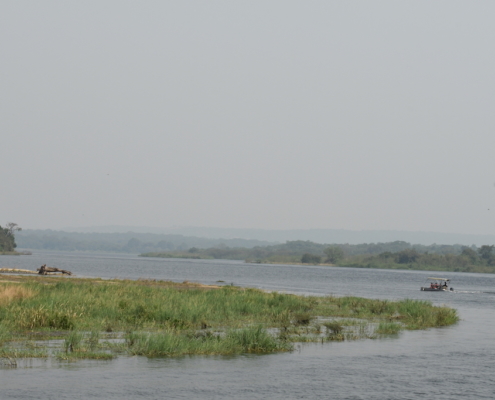 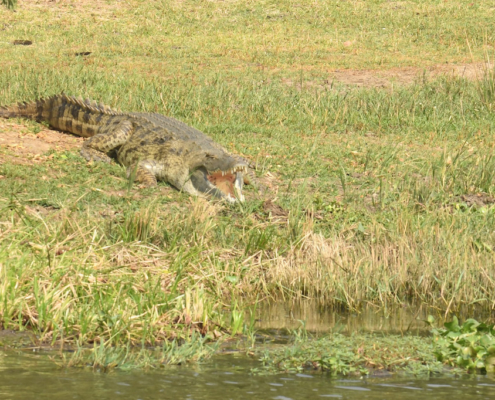 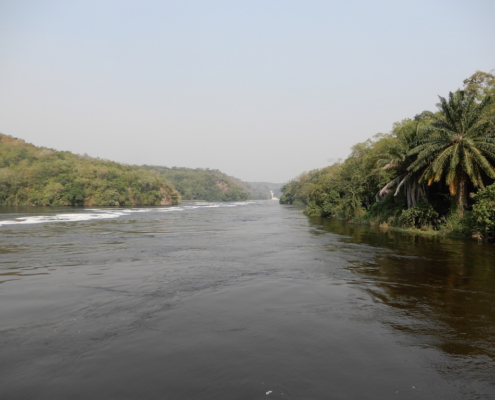 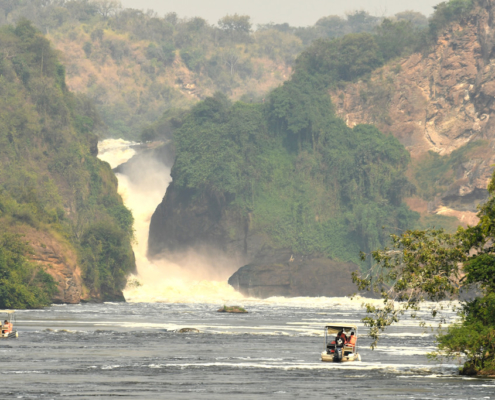 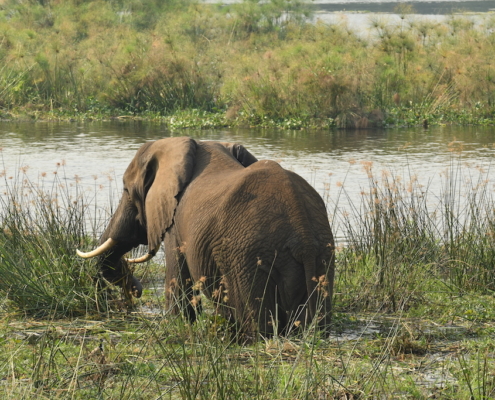 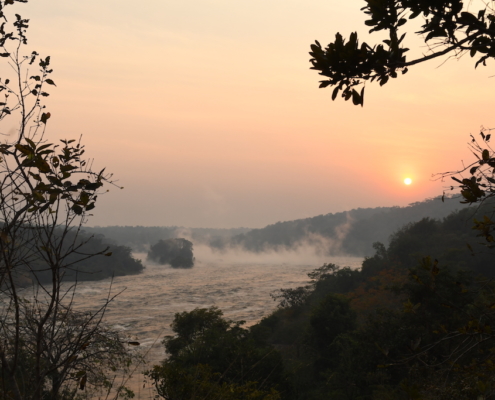 Maps were disabled by the visitor on this site.
Chimpanzees