"We are very lucky today," concludes Justice, our guide. The small, sturdy man in a brown ranger outfit. Equipped with a gun. Like any authority in Uganda that takes care of tourists. For the individual traveling tourist the booking of a chimpanzee stretch is shrouded in mist. The day before we paid the permit for the trip. That much is certain. Our participation is not listed anywhere. Trust that it will be okay. That remains a challenge in Africa.

Kickboxer
We report extra early to the head office in the Kibale National Park. Waiting what will happen. Until our name is announced and guide Justice introduces himself to us. In a group of 6 tourists we walk a little later into the rainforest, looking for chimpanzees. These monkeys live as individuals in a group. No strong family bond. More a covenant to survive together in their own territory. Other chimpanzee groups are the biggest threat. After ten minutes walking through the narrow overgrown paths among the tall trees, Justice takes his mobile. "The chimps are here," he reports to his organization. He smelled their urine and got into a fresh excrement. After five minutes we hear shrill screams. Followed by strong stamping. Two males arrive in a trot. One monkey jumps up and kicks against the trunk of a thick tree with its full weight of 65 kg. Like a kick boxer who eliminates his opponent. The shovel is thumping loudly. The chimpanzees make their entrance unmistakably. Do they want to impress the tourists or a small monkey species high in the tree? The monkey, according to Justice. The big men see a delicious breakfast in him. Anyway, with us a deep awe has been inspired.

Emotions
The chimpanzees are omnivores just like humans. In addition to leaves and fruit, they eat other monkey species and small animals. Cannibalism is no stranger to them. They kill and consume their peers from other groups without remorse. To expand their territory, for example. Our image of cute monkeys, such as in the Tarzan movie, is being adjusted. Their height of 1.70 meters contributes to this. Man is more related to the chimpanzee than to the gorilla. The DNA shows the most similarities. Fortunately we do not see a mirror image in external appearance. In the facial expressions, all the more. We think we recognize all kinds of emotions. Expressions such as joy, sadness and entertainment. That makes observing the animals so fascinating. The chimpanzee with its head tilted up and looking directly into my eyes makes me melt. A mixture of interest and sympathy, I perceive. As if he really saw me. A wonderful moment.

On the road with the chimps
We keep a firm hold on following the monkeys. Justice is a true professional. He sees through the chimpanzees. The paths they will choose. He anticipates which means we have a good view of the animals. The monkeys are ahead of us on four feet. Alternating for a short period of time on two legs. Screaming at each other. It is quite a parade. Certainly now that other guides connect with tourists. When the monkeys climb the trees and swing through the treetops, everyone can see them well. It remains a feast to admire the monkeys. The monkeys stand between a number of trees. Onno and I film and photograph to my dear lust. Pointing each other at a monkey that does something special.

Relax
Justice repeatedly calls that our hour with the chimpanzees has ended. The monkeys are now high in the trees. They continue to eat and laze there. They will come down again later this afternoon. We only listen to our guide with half an ear. We don't just let ourselves be separated from the monkeys and we keep photographing. To the frustration of Justice, the monkeys clamber down again. The Alpha male stretches out on the floor. Relaxed, he remains almost motionless. At least 24 other tourists have gathered around us. It is urgent on the few square meters of vegetation-free land. Filming a tangle of people photographing a lying man is almost more amusing than the monkey itself.

Lots of luck
"There are new groups of tourists on the road who have not seen any chimpanzees this morning," Justice announces. We leave the place before it gets too busy. "It is an opportunity to spot monkeys on their way to another place to eat," says our guide. 'They are easy to see on the paths. Some tourists have to deal with three monkeys that eat leaves high in the tree for an hour '.
He shares his knowledge about the monkeys. They turn 55 on average. In the zoos even 10 years older. Thanks to more varied food than found in nature. And no peers who end their lives prematurely out of territorial drive. An estimated 100.000 to 200.000 chimpanzees live in West and Central Africa. We hope that the numbers will be maintained or, even better, grow. It is too nice and overwhelming to admire the closely related chimpanzees in their habitat. 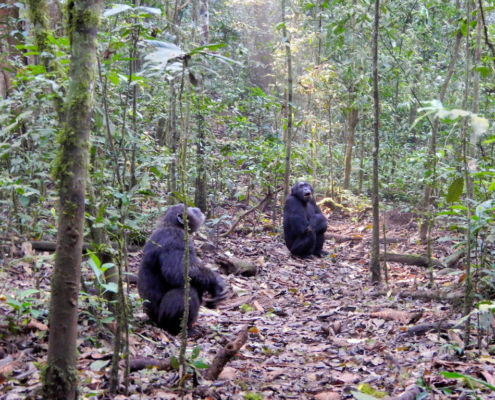 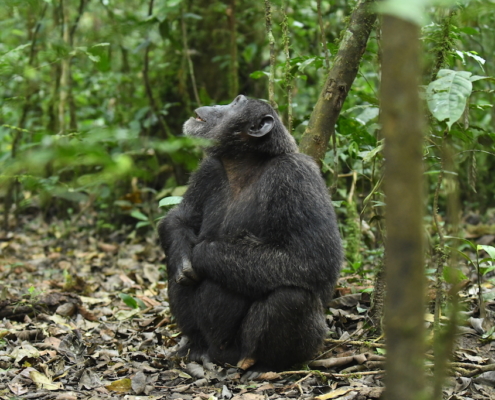 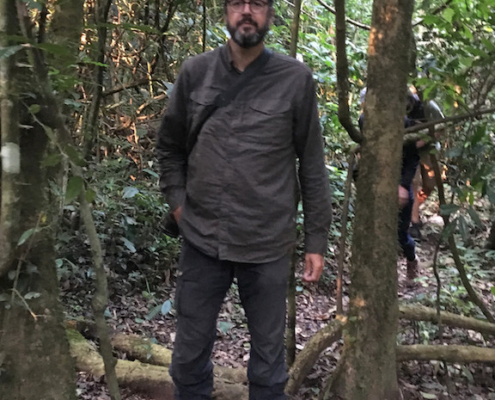 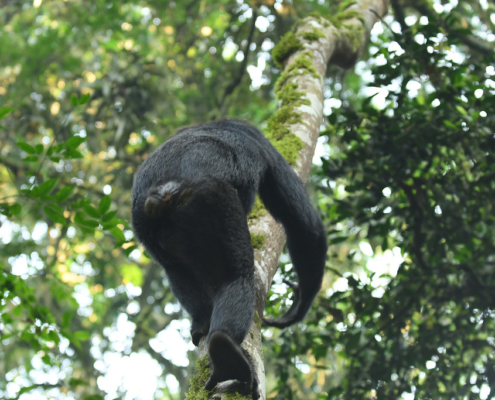 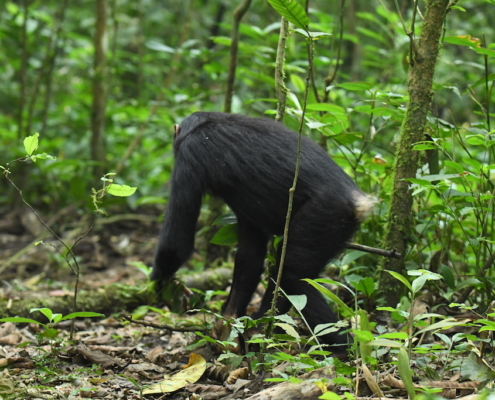 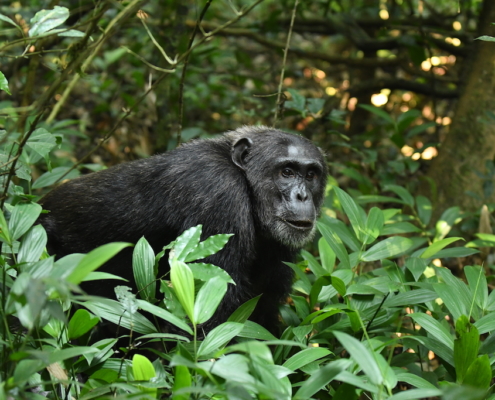 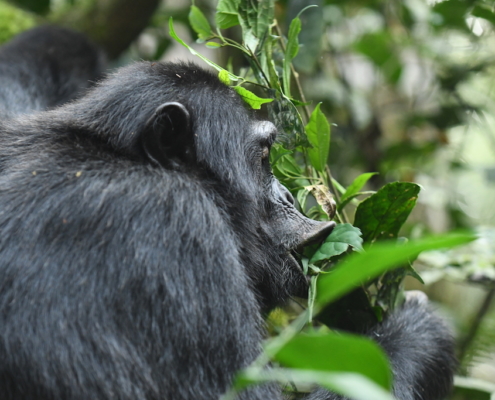 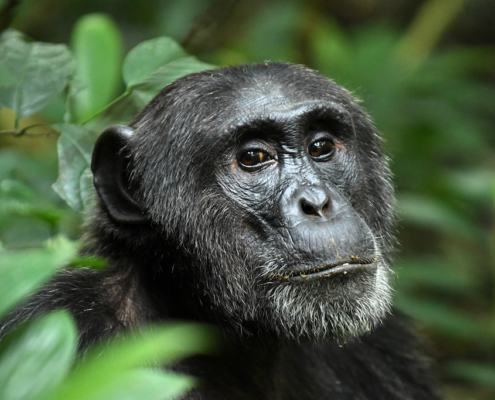 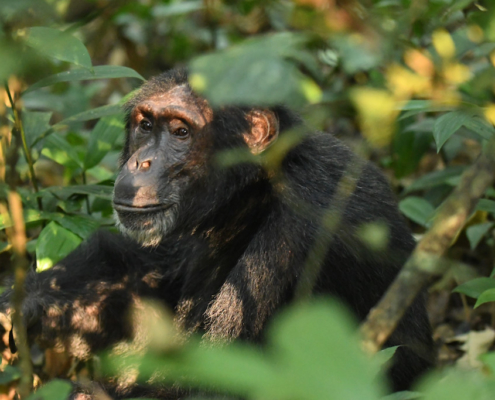 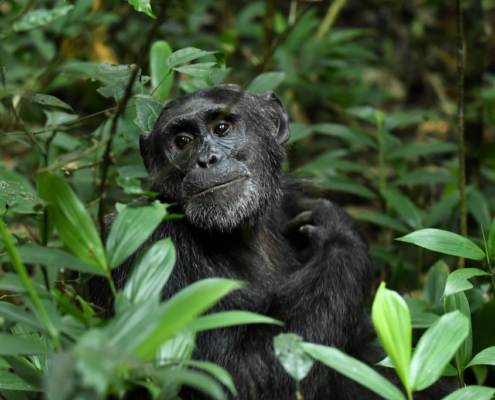 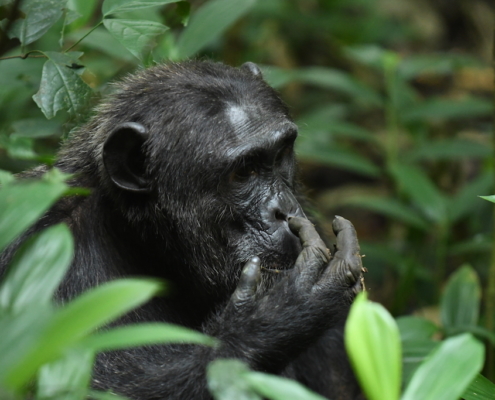 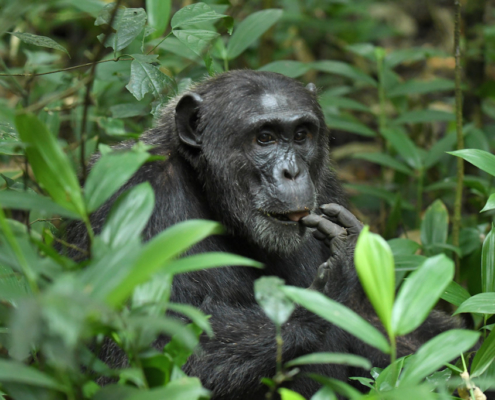 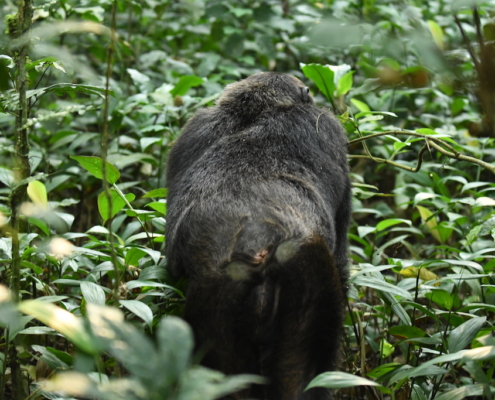 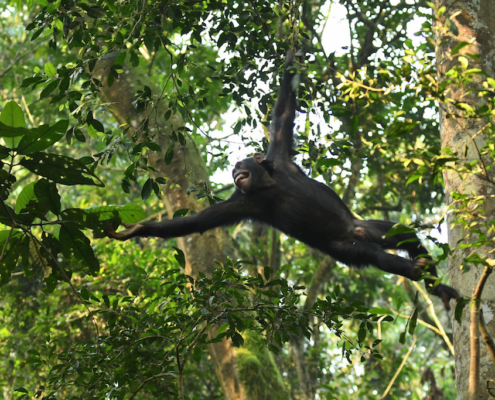 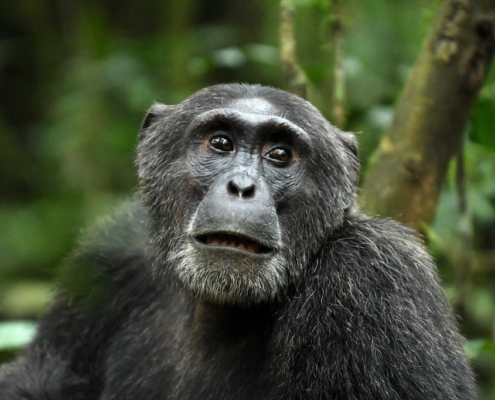 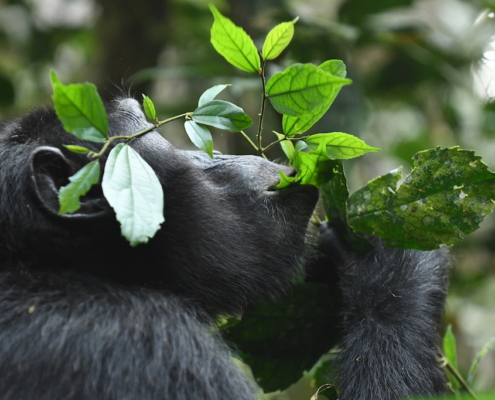 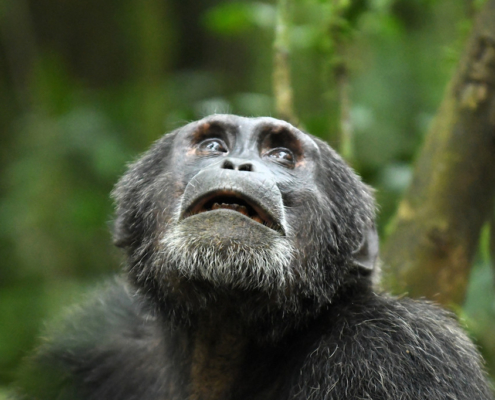 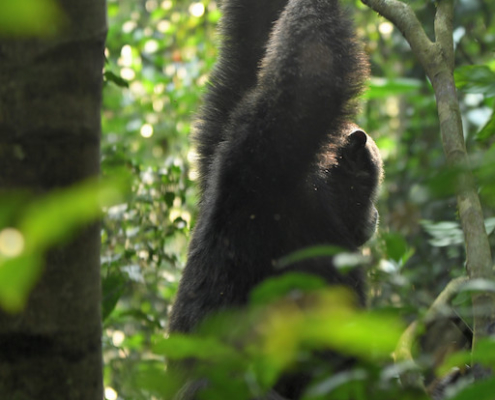 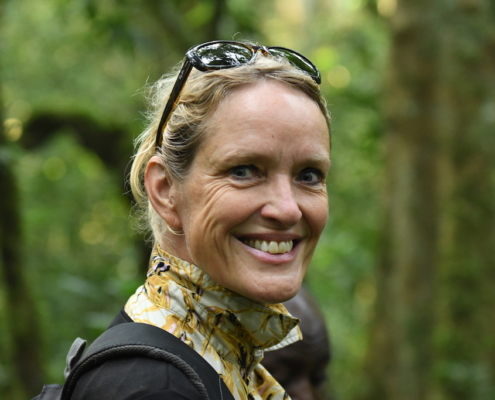 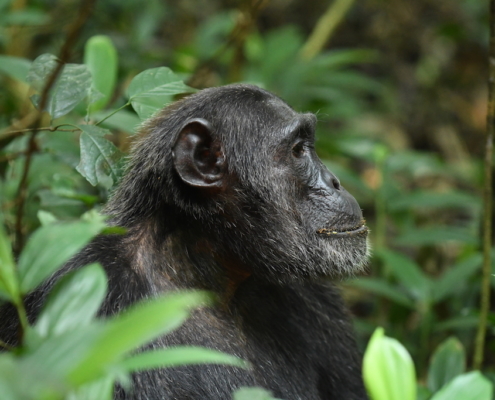 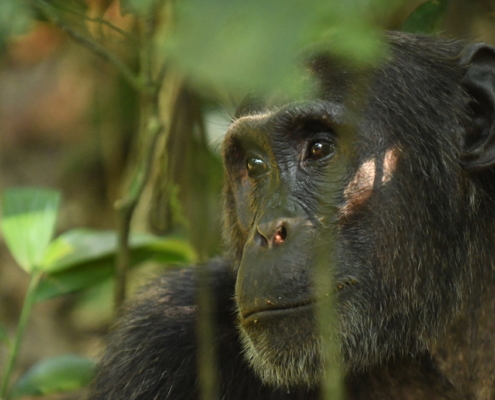 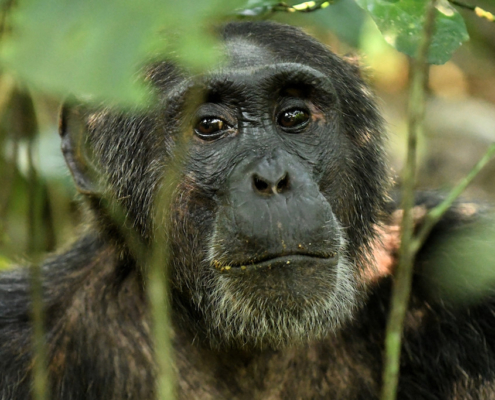 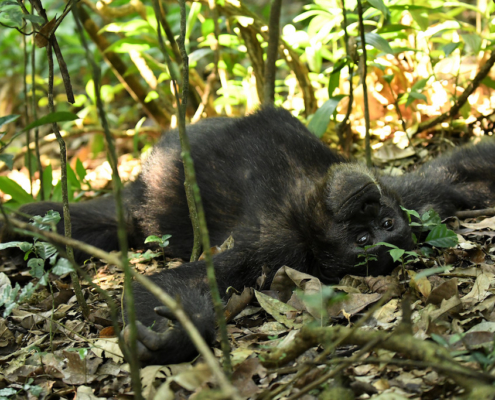 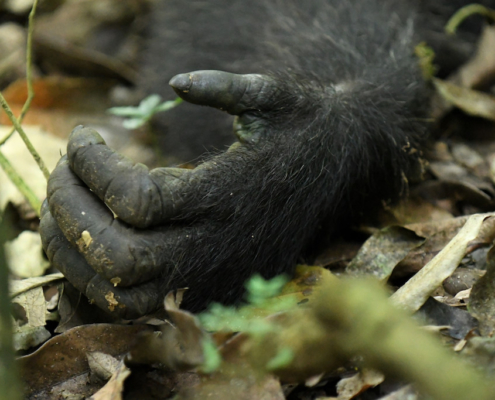 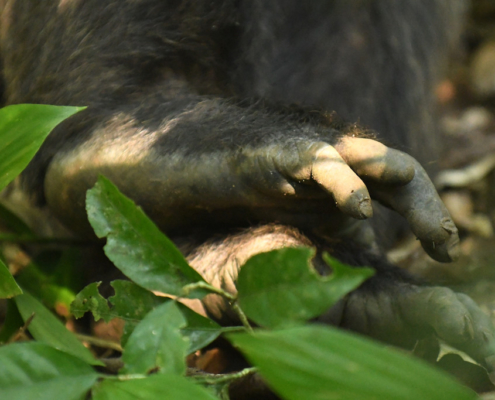 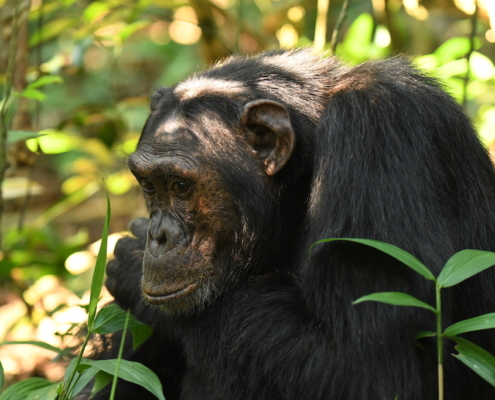 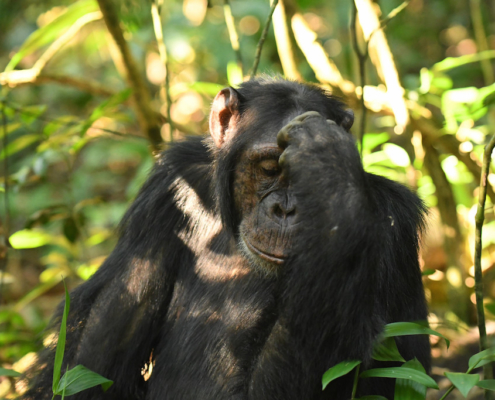 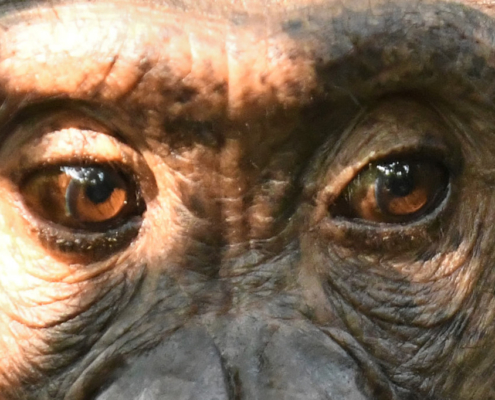 Maps were disabled by the visitor on this site.
Equator

Misunderstanding and misunderstood
Scroll to top